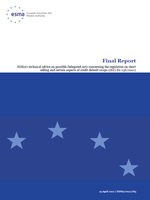 The Regulation (EU) No 236/2012 of the European Parliament and of the Council of 14 March on short selling and certain aspects of credit default swaps (the Regulation) was published in the Official Journal of the European Union on 24 March 20121 and will be applicable from 1 November 2012.

Taking into account the amount of work, complexity of the issues and the very tight deadlines, the process of preparing technical standards and drafting the advice on all delegated acts is being significantly compressed compared to normal ESMA practices. The most important differences compared to normal practice is the absence of a previous call for evidence (used normally to gather early views to help shape the legal proposals), the length of the consultation period (reduced to 3 weeks) and the absence of a costbenefit analysis incorporated in the consultation of the technical standards. Nevertheless, it was possible to organise a roundtable with European and international associations representing the various stakeholders at the beginning of December in order to collect views on the approach to be taken in the main technical standards and delegated acts foreseen in the Regulation. On 24 January, ESMA published a consultation paper on draft technical standards (ESMA/2012/30). The public consultation closed on 9 March. The interested parties also had the opportunity to provide their comments on ESMA’s proposals at an open hearing held on 29 February 2012.

I. Specification of the definitions laid down in the Regulation and in particular of when a natural or legal person is considered to own a financial instrument for the purposes of the definition of short sale (Article 2(2))

III. Specification of the cases in which a credit default swap transaction is considered to be hedging against a default risk and the method of calculation of an uncovered position in a credit default swap and the method of calculating positions where different entities in a group have long or short positions or for fund management activities related to separate funds (Article 4(2))

IV. Specification of the amounts and incremental levels of notification thresholds referred to in Article 7(2) for net short positions relating to the issued sovereign debt of a sovereign issuer (Article 7(3))

V. Specification of the parameters and methods for calculating the threshold of liquidity referred to in Article 13(3) in relation to the issued sovereign debt for suspending restrictions on short sales of sovereign debt (Article 13(4))

VI. Specification of what constitutes a significant fall in value for financial instruments other than liquid shares and draft regulatory standard on the method for calculating the fall (Article 23)