ESMA’s Report on the Supervision of Credit Rating Agencies 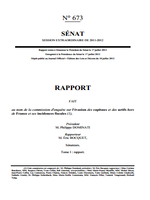 ESMA’s Report on the Supervision of Credit Rating Agencies

These examinations are the first step in an on-going supervisory process conducted by ESMA. ESMA identified several shortcomings and areas for improvement that apply to a varying extent to all CRAs relating to the following topics :

In light of its regulatory objective to protect investors and financial stability, ESMA decided to focus its first on-site-inspections on the larger CRAs. ESMA's examination aimed at monitoring compliance by CRAs with the EU Regulation, and focused in particular on three specific credit rating classes (sovereign ratings, bank ratings and covered bond ratings) which it considered to be significant, given the current market trends, the degree of credit linkage and the interdependence of these products.

ESMA has not determined whether any of the observations in the report constitute a breach of the CRA Regulation. ESMA will follow-up on the observations through risk mitigation plans for each individual CRA in the first half of 2012.

IV.4 Disclosure of Methodologies and presentation of ratings