Enterprising States, Getting Down to Small Business 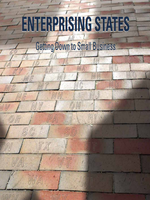 Enterprising States, Getting Down to Small Business

Nothing better expresses America’s aspirational ideal than the notion of small enterprise as the primary creator of jobs and innovation. Small businesses, defined as companies with fewer than 500 employees, have traditionally driven our economy, particularly after recessions. Yet today, in a manner not seen since the 1950s, the very relevance and vitality of our startup culture is under assault. For the country and the states, this is a matter of the utmost urgency.

The central motor of the job engine clearly is not firing on all cylinders.

Weak job growth has touched the entire economy. Gross domestic product growth is weak, unemployment remains at nearly 8%, and business sentiment is far from optimal. Despite high stock prices and consistently strong corporate profits, the rate of employment growth remains lower than the rate of the expansion of the workforce. Given the understandable focus of larger firms on boosting productivity and on investing capital into technology, it’s highly unlikely these companies will create enough jobs to dent our huge and growing employment deficit.

Getting Down to Small Business in the States

Ranking the States by Growth and Performance – Metric Definitions