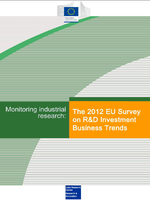 Top EU businesses expect their investments in research and development to grow by an average of 4% annually over 2012 to 2014, according to the 2012 EU Survey on R&D Investment Business Trends published today. The results of this survey, which was carried out by the JRC's Institute for Prospective Technological Studies (IPTS) together with the European Commission's Directorate-General for Research and Innovation, are based on information from 187 of the 1,000 EU-based companies that were studied when the 2011 EU Industrial R&D Investment Scoreboard was prepared.

The 187 companies that responded to the survey are mainly larger companies. Together they are responsible for R&D investment worth almost €45 billion, constituting around 40% of the total R&D investment by the 1,000 top EU based investors, which is a significant share of European business investment. Their average investment expectation is slightly lower than that of last year (5%), when these companies participated in a similar survey, which reflects the worsening of the economic context. However, it is still a strong signal of the importance that these companies attach to strengthening R&D as a key factor for their future growth and prosperity.

It is in the software and computer services sector that the expectations of growth in R&D investments over 2012-2014 are the highest, with an average of 11% per year. Like for most sectors, this is higher than the annual R&D investment growth rates observed on average over the 2007-2010 period. However, in the pharmaceuticals and biotechnology sector, the expectations for 2012-2014, at 3% per annum, are lower than the average rate observed over 2007-2010.

By end-2012 the European Commission will publish its next EU Industrial R&D Investment Scoreboard, which ranks the worldwide biggest companies investing in R&D.

6 Annex B: The R&D Investment Questionnaire