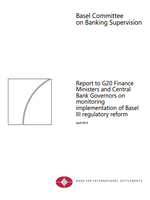 This report updates G20 Finance Ministers and Central Bank Governors on progress in adoption of the Basel III regulatory reforms since the Basel Committee on Banking Supervision issued its October 2012 report.

The scope of this update is broader than previous progress reports to the G20. In addition to reporting on the steps taken by Basel Committee member jurisdictions towards implementing the Basel III capital standards, which was the focus of the last report, this update also covers developments in other Basel III regulatory standards, and banks’ progress in bolstering their capital bases. The report also highlights specific implementation-related shortcomings that are surfacing, which require continued policy and operational attention.

Despite some delays in implementing Basel III regulations, national supervisors are ensuring that internationally active banks are, where necessary, making steady progress in strengthening their capital base to meet the new Basel III standards. The latest data collected by the Basel Committee indicate that, for the 12 months ending June 2012, large internationally active banks on average raised their capital ratios. For example, the average Common Equity Tier 1 (CET1) capital ratios rose from 7.1% to 8.5% of risk-weighted assets.

For those banks that do not yet meet the fully-phased in requirements, CET1 capital shortfalls fell from roughly €450 billion to €200 billion.

The Basel Committee’s Regulatory Consistency Assessment Programme (RCAP) introduced in 2012 is helping advance and deepen the Basel III reform efforts. The RCAP is monitoring progress in introducing regulations, assessing their consistency with the agreed international standards, and analysing outcomes across banks and regulatory regimes, thereby helping to ensure confidence in the regulatory framework. The RCAP is also helping emphasise that issuing domestic Basel III-based rules alone does not guarantee effective implementation. Sound supervisory and industry practices along with rigorous enforcement and analysis of intended prudential outcomes are also required for effective implementation of the Basel III framework.

The RCAP also studies the consistency of regulations’ effects on banks. This work, which the Committee started in 2012, is analysing the sources of variation across banks in their estimates of riskweighted assets (RWAs). The first set of findings, which was published in January 2013, identified considerable variation in the risk weighting of assets held in the trading book due to factors other than risk exposures. Preliminary results for the assets held in the banking book point in a similar direction.

While some variation in RWAs is natural and desirable, excessive variation diminishes the comparability of the reported capital ratios. Further analysis is therefore under way, and areas where Basel Committee standards might be modified to reduce excessive variation are becoming apparent. The Committee has begun to consider what form some of these modifications might take. Three types of policy options are emerging: (i) improving public disclosure and regulatory data collection to aid the understanding of banks’ calculations of RWAs; (ii) narrowing the modelling choices for banks; and (iii) further harmonising supervisory practices with regard to model approvals (to reduce the level of variation in RWAs). In this context, the Committee’s fundamental review of the market risk framework will address some of the key findings with regard to the risk measurement of trading book assets.

The Committee continues its work to finalise the development of its post-crisis reforms, including the remaining outstanding components of the Basel III framework. With respect to Basel III’s liquidity reforms, the final form of the Liquidity Coverage Ratio was published in January 2013. The Committee intends to finalise its work on the leverage ratio in 2013, and most if not all work on the Net Stable Funding Ratio, the trading book, securitisation and large exposures should be finished in 2014. It remains essential, however, that the Basel framework be adopted and fully implemented in a timely manner. While the Basel Committee continues to strengthen its implementation monitoring efforts and the RCAP, it urges G20 Finance Ministers and Central Bank Governors to renew their commitment to completion of the Basel III regulatory reforms consistently, expeditiously and completely.