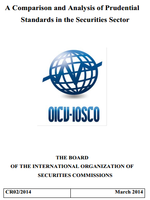 In November 2010, the G20 Seoul Summit launched an action plan with the purpose of achieving strong, sustainable and balanced growth.

The commitment called for significant policy actions in several areas. Reforming the financial sector is a central element of the action plan. With the aim of enhancing the stability of financial markets, the Summit “…called on IOSCO to develop by June 2011 and report to the FSB (Financial Stability Board) recommendations to promote markets’ integrity and efficiency to mitigate the risks posed to the financial system by the latest technological developments.” The G20 mandate meshed closely with work that IOSCO’s Technical Committee already had underway examining the emergence and impact of high frequency trading on the markets. In consequence, the Technical Committee published in October 2011 a Final Report entitled Regulatory Issues Raised by the Impact of Technological Changes on Market Integrity and Efficiency, having consulted in July/August 2011.

The Final Report was welcomed by the G20 and the FSB, which committed to implement the report’s recommendations. In addition, a follow-on request was made that IOSCO undertake “further work by mid-2012.”

The Chairman of the Technical Committee responded in a letter to the FSB Chairman, dated 5 July 2011, in which he stated that IOSCO would assess the new challenges that technological changes pose for regulators in their market surveillance, which include (1) the fragmentation of markets and the resulting dispersal of trading information; and (2) the increased speed of trading and regulators’ ability to gather and process the increased volume of trading data.

3 Challenges to Effective Monitoring of Markets